Leaving Positano would have been much more devastating if it had been the last leg of our trip, lucky for us we headed to Rome! The train from Napoli to Roma was gorgeous, just being able to ride and look out of the windows at Italian mountains and countryside was such a treat. Although I am usually a fall right to sleep in cars and airplanes type of girl, I wouldn’t have even considered missing out on the views by train in Italy.

We arrived easily in Roma and headed to our apartment. In a bonehead move from Roma Termini we did not pay attention to the fact that the taxi driver did not turn the meter on and way over charged us to get to our apartment. It was the first time I felt like a naive, American tourist. Oh well, guard was back up.

Travel tip: Make sure your cab driver always has the meter on, unless it’s a set rate. Pay attention, folks.

Luckily I was over the expensive taxi as soon as we stepped into our perfect apartment.

We were in the Ponte neighborhood of Rome near Piazza Navona and within walking distance to so many things: the Pantheon, Vatican City, Campo di Fiore, etc. Plus the neighborhood was fabulous. It felt a little bit like New York’s West Village, full of small coffee shops, antique stores, boutiques, pizza places, bars, restaurants, etc. I was in heaven. 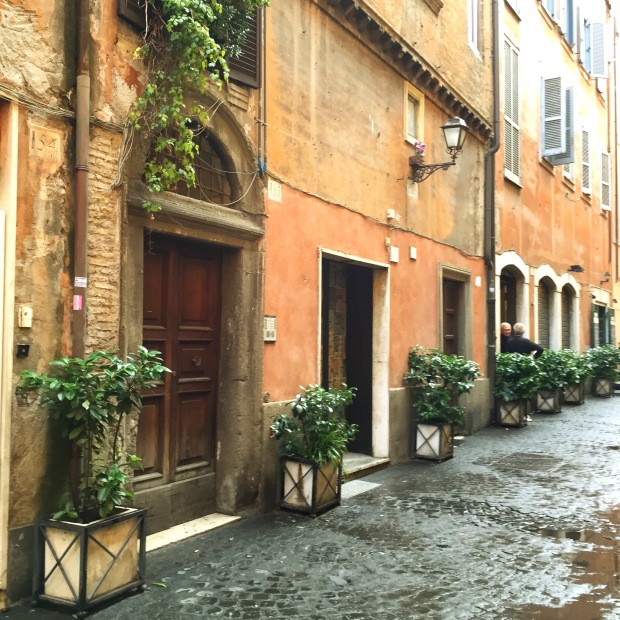 After settling into our apartment we walked to meet Angel Tours for their “golf cart tour.” Ok this sounds and was touristy but it was a very small group, six of us, and we totally embraced it. We were able to see so much of Rome, a geographically very large city, that we would have never seen on our own. Coming from an early morning trip from Positano riding along was perfect for us. The tour started in the Borghese Gardens, and was part walking and part riding.  I would recommend it to anyone on their first day in Roma. We were able to see Piazza del Popolo, Via del Corso, Piazza Venezia, St. Peter’s Square, Gianicolo Hill,  Isola Tiberina, Mouth of Truth, Circus Maximus, and look through the “key hole.” I can’t tell you what that is because it will give the surprise element away but it was really neat, and we definitely would have never found that on our own. Not to mention we were learning so much about Roman history the entire time.

Travel tip: Book tours ahead of time and if at all possible, only set one big item per day so you will actually appreciate it instead of being “toured out.” 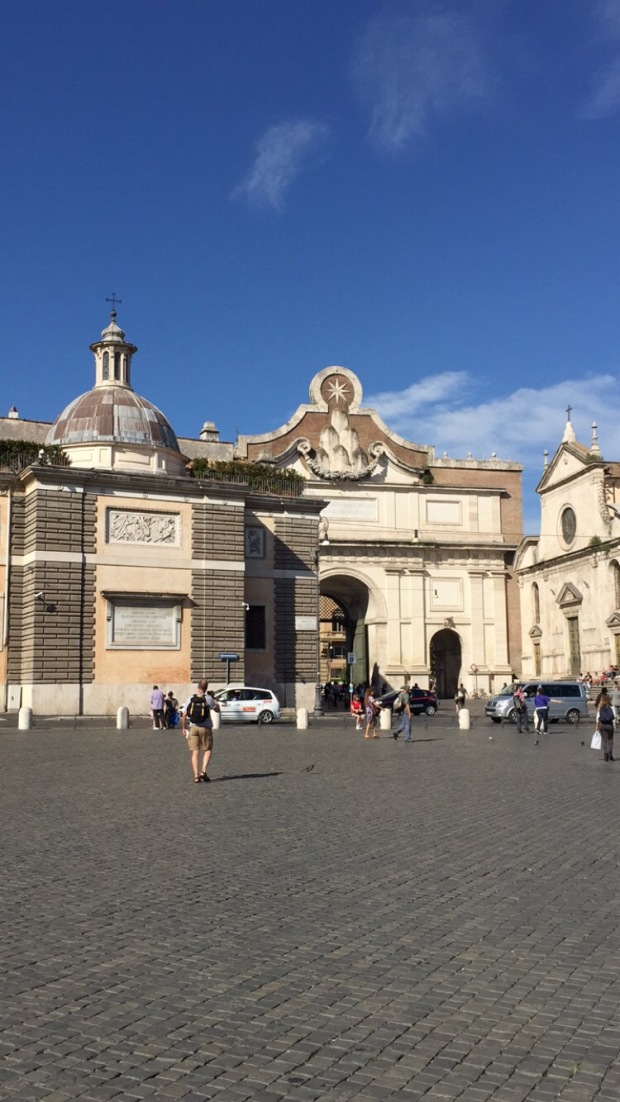 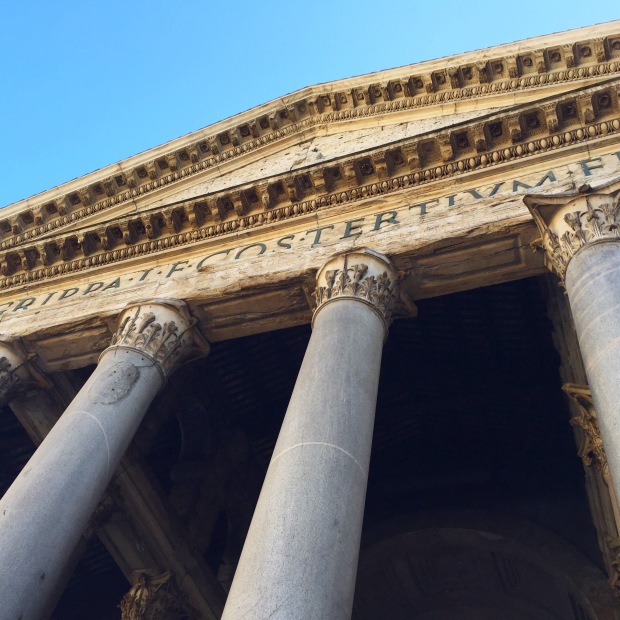 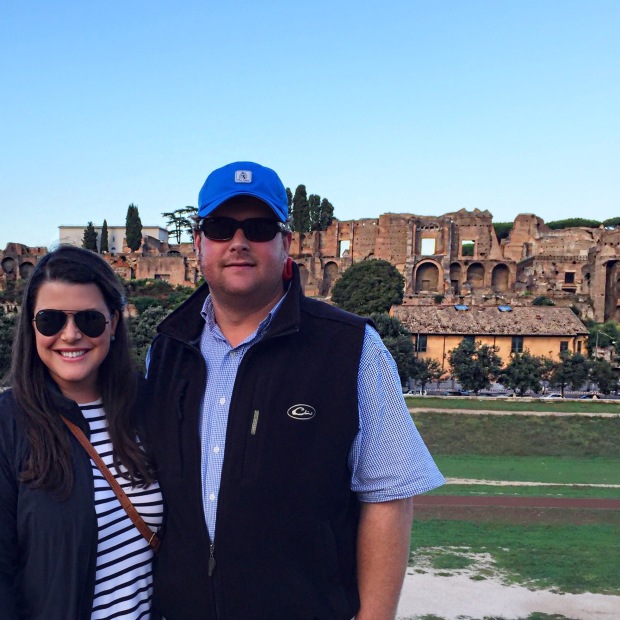 After this tour Grant and I went for drinks at a bar that was recommended to us by the apartment owner as well as our tour guide called Scholar’s Pub. It was the first of the funny Irish pubs we found in Rome and we both loved it. From Scholar’s we circled back to our apartment then walked a couple of blocks to da Francesco for dinner. da Francesco came recommended from several of our friend’s and it was a good, casual, inexpensive spot for dinner. We sat outside and loved taking in more of our neighborhood while in Rome. We ordered a pizza and the pasta cacio e pepe to split.

Travel tip: The lighting in many restaurants is very different than what we have come to expect in America. If you walk into a restaurant that you thought was supposed to be nice but the lighting is harsh and bright do not be surprised or discouraged.

For our first full day in Rome we grabbed an early lunch at the very casual, sandwich shop, LikeAt Grant got the sandwich of the day which was some sort of schnitzel and it was delicious, I was comparing mine to a sandwich that I had eaten in Firenze and there was no contest, but it was still a great easy spot. Sandwiches, pizza, pasta, wine on repeat. PTL for all of the walking.

We walked to the Vatican taking in sights of the Castle Sant’Angelo and the Tiber River. I love that Rome is such a huge city but has lots of greenery and water running through it. It’s funny to cross the river and be in Vatican City, a country, state and city of it’s own. 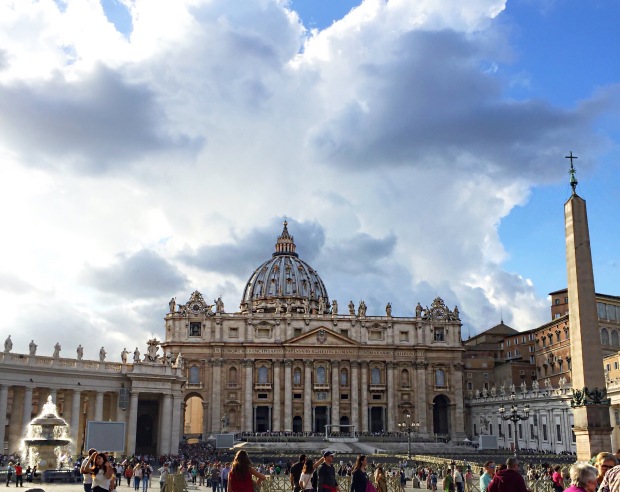 We used Angel Tours again for our tour of the Vatican, and I am so thankful that we did. This place is huge and would have been very overwhelming with out a guide. We were in a group of twelve people and used headsets and the whole bit, but it was very helpful and informative. I booked the three hour tour and it was the shortest tour of the Vatican that I could find – that sounds awful I know, but some of these tours took up the entire day. Three hours was perfect. We saw the Vatican Museum and courtyard plus the Sistine Chapel and Saint Peter’s Basilica. I cannot say enough about the Sistine Chapel. It was crowded, but incredible. Our tour guide did a great job telling us all about it and different things to look for before we went inside, because no talking is allowed. No pictures are allowed either; it was nice to actually look at something without looking at it through the lens of my camera (… by camera I mean my phone). After spending time in the Sistine Chapel we went into Saint Peter’s Basilica and that was amazing, but at this point after a week in and out of ornate churches it felt a little similar to the other gorgeous cathedrals that we had seen. If Roma had been our first stop I know I would have been in awe of this cathedral the way I was in Florence and Sienna. 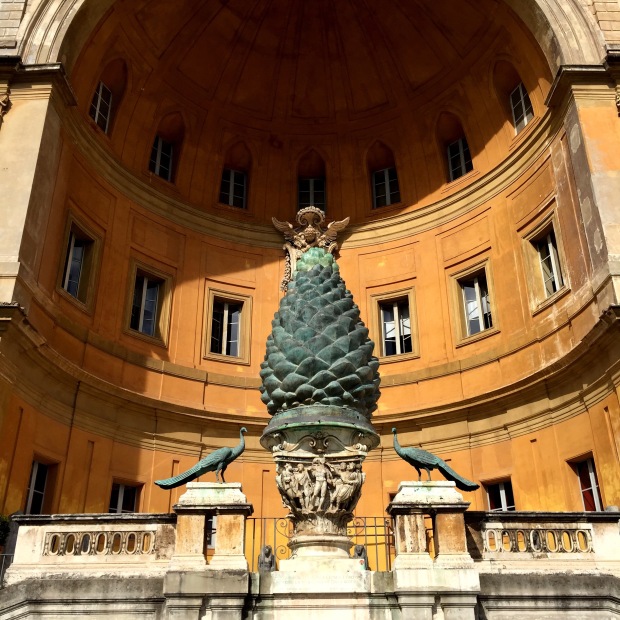 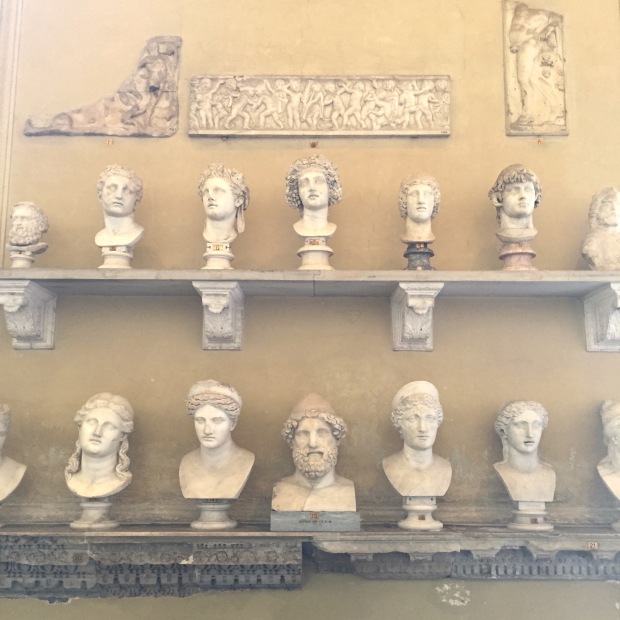 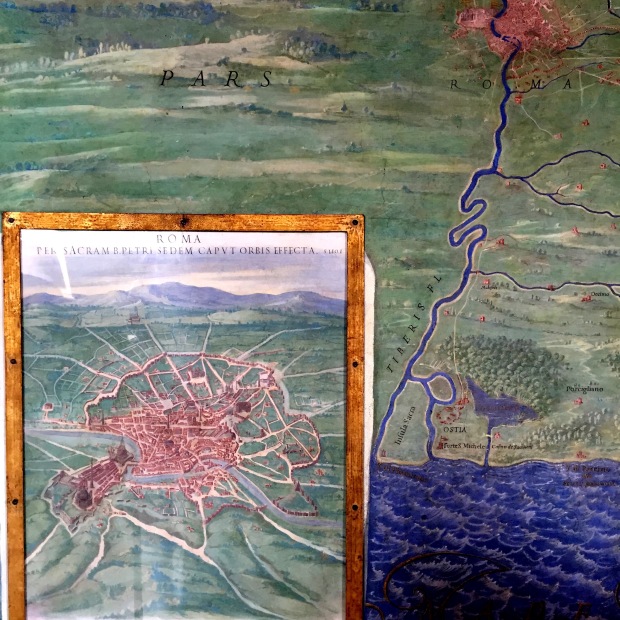 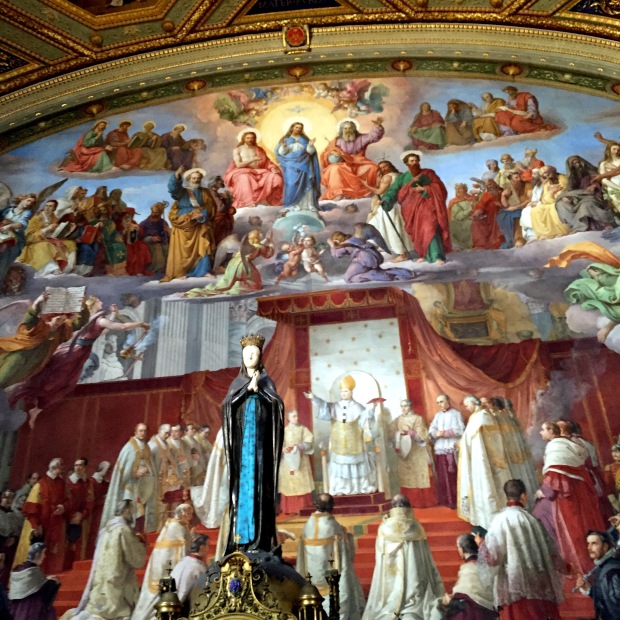 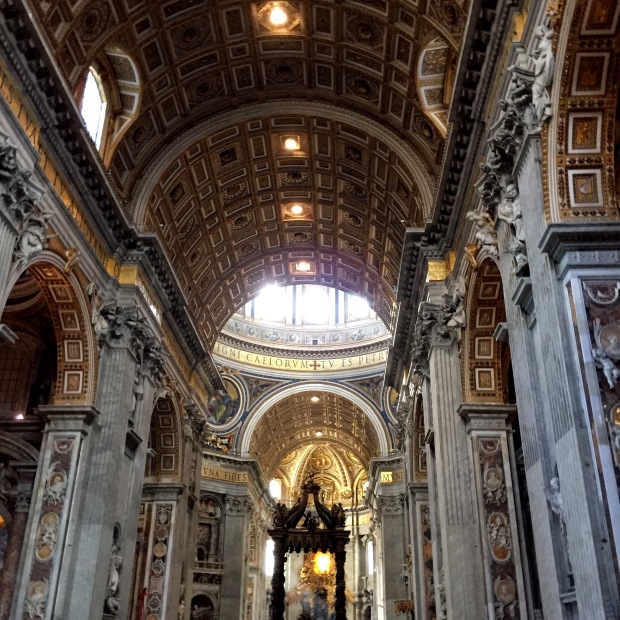 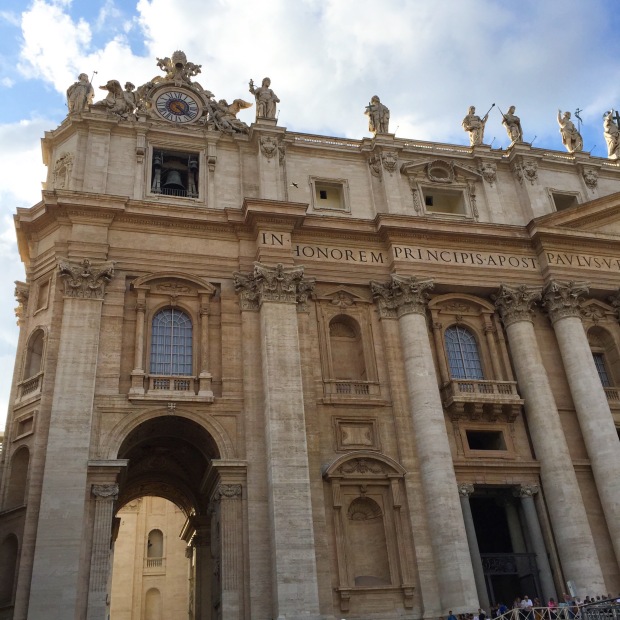 After leaving Saint Peter’s we embraced the fountains and sites on the square. Then we went into the Vatican post office to buy and mail postcards to family. Post cards are always something I buy and never actually send. Since Vatican City had it’s very own little post office right on Saint Peter’s Square it was nice being able to go ahead and knock this out.

Following our afternoon at the Vatican it was time for… drinks! You guessed it, we went to Abbey Theatre Irish Pub (yes, another Irish Pub in Italy – bizarre, I know). Abbey Pub was perfect: a small bar in the heart of “our neighborhood” near Piazza Navona. I loved that it had great open windows for looking out into the world and not feeling like you are “just” in a bar. It was also just across the street from Fridgidarium, a very popular gelato spot known for serving “dipped” gelato.

This evening we took a taxi to Piazza Barberini to explore a bit before our reservation at Osteria Barberini. Several of our friends recommended this spot and it may have been our very best meal in all of Italy (or at least tied with da Adolfo in Positano). Truffles galore. Crostini with truffle to begin, chianti classico preserve, lasagne for Grant and the best pasta of all time for me – Tagliolini Al Tartufo Bianco. I did not want this meal to end. I have always liked and appreciated truffles but don’t obsess over them the way some people do, but this meal and pasta gave me a new appreciation for fresh white truffles in truffle season in Italy. Omg. To round out the evening we split the tiramisu.

Next we headed to a bar that Grant had been curious about since we arrived in Rome, The Ice Bar, he saw an advertisement for this place and was dying to check it out. It was a hysterical, tourist trap — similar to those in all big cities that were popular 10 years ago. But Rome had been unseasonably hot and the Ice Bar was cold with excellent vodka cocktails, so was a big hit with one of us. All ice everything. It was really fun and funny, but no I do not necessarily anyone searching this out to give it a try. 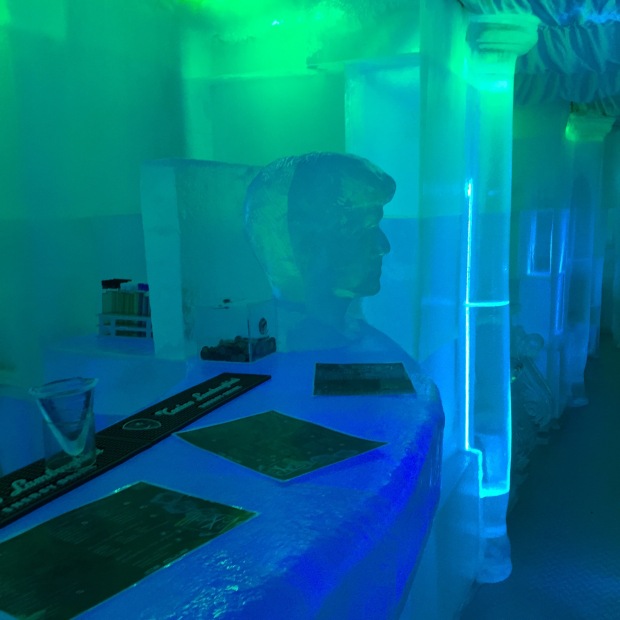 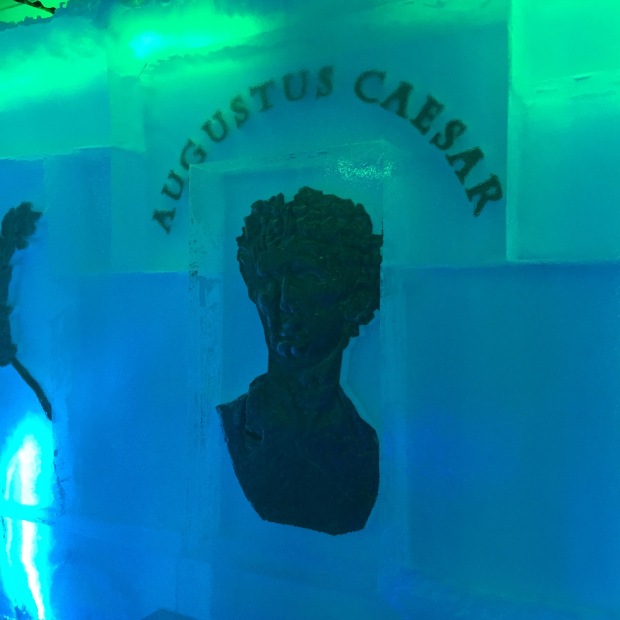 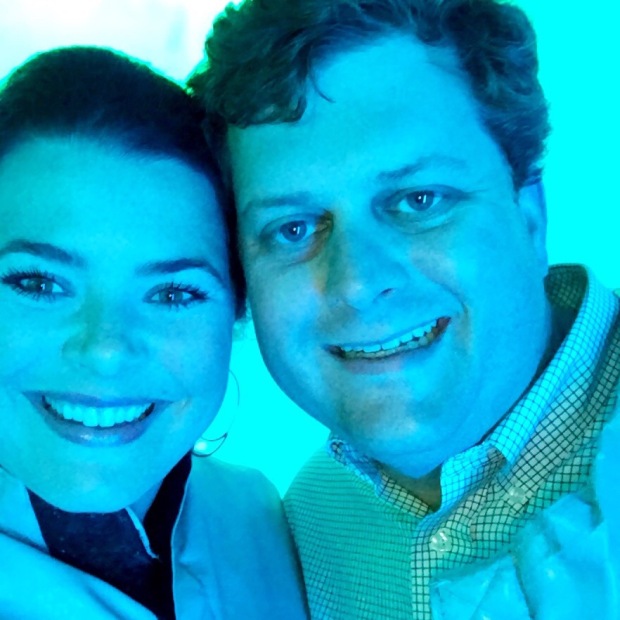 On our last day in Roma we walked to Campo di Fiore. I loved this market so much. Seeing all of the fresh flowers, harvest bounty, people watching and interactions. I could have stayed here for hours. Instead we wandered through for a bit and then headed towards the Colosseum. 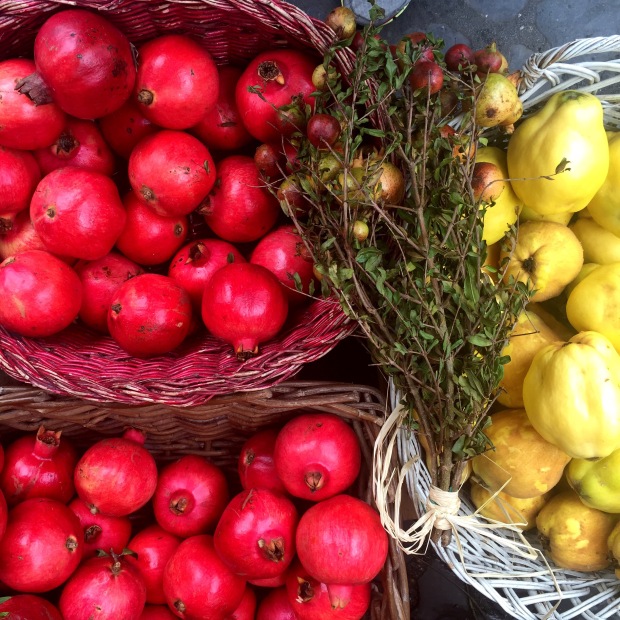 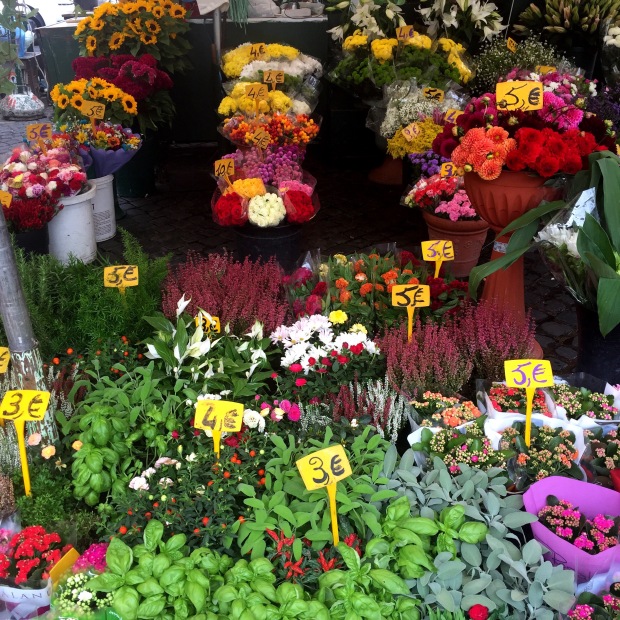 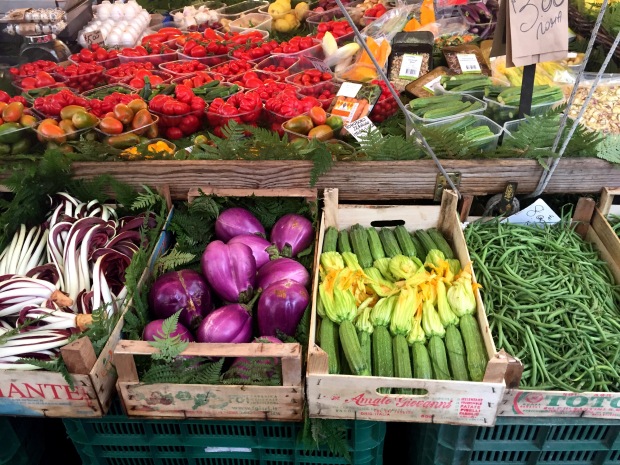 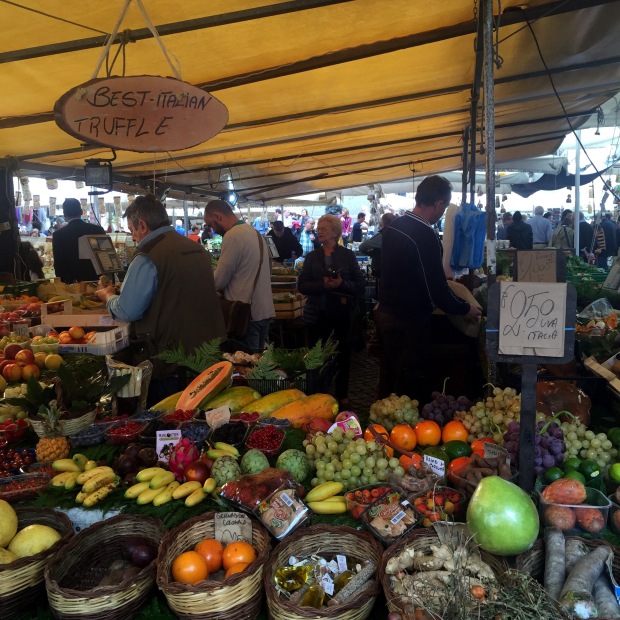 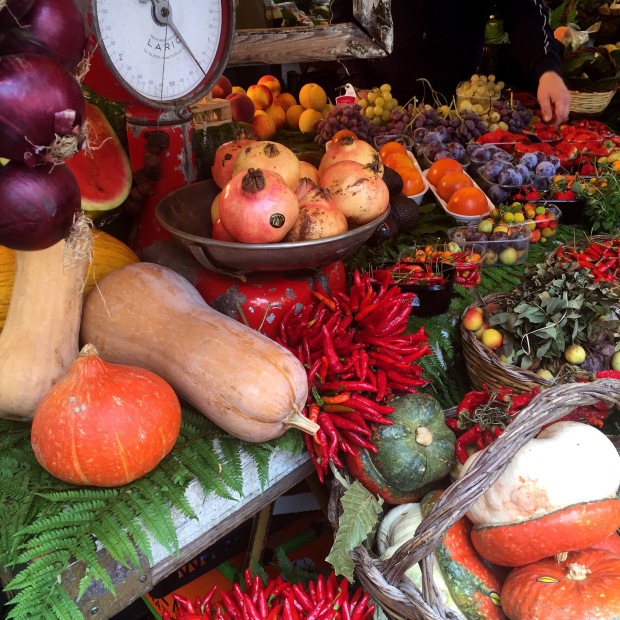 I wish I would have booked a tour of the Colosseum and Roman Forum through Angel Tours. They made things so easy. Instead Grant and I got to the Colosseum and were overwhelmed by the lines and amount of people. I tried listening to my handy dandy Rick Steves’ audio guides here, which worked well in Florence but not for this. There was just too much going on. We wandered around for a bit then walked through the Roman Forum then checked both of those off of the list. Old, crumbling, cool and sad (like the whole gladiator thing, still so sad and foreign to me!).

Travel tip: If you want to really see and learn about he Colosseum and Roman Forum book a tour of these. 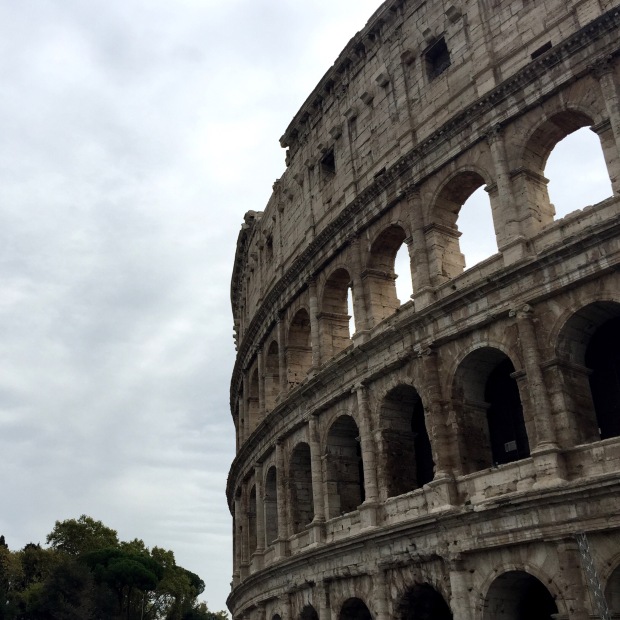 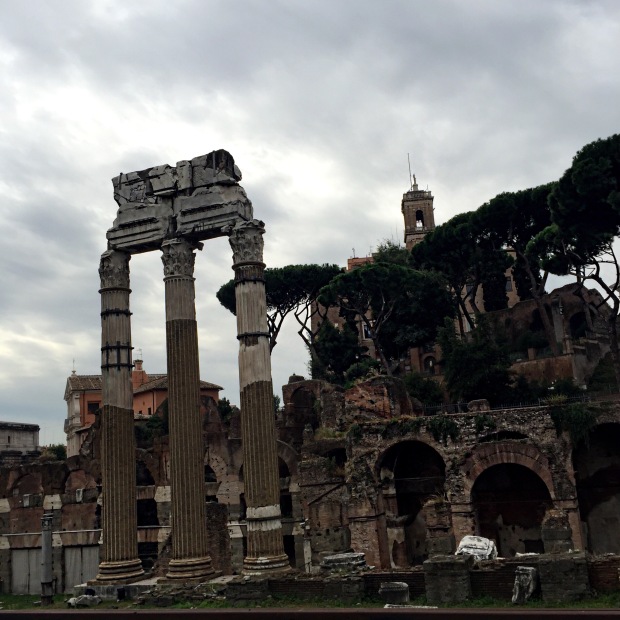 From the Colosseum we headed back towards our house to try true Roman style pizza at da Baffetto. We had heard there would be lines, but lucky for us we were there for a late lunch and it only took us 5 minutes to get a seat. I loved the pizza here! In Rome pizza crust is very thin and you eat your pizza with a fork and knife. I ordered the vegetarian pizza with eggplant, zucchini and squash blossoms (sounds sort of crazy but I needed a break from salted meat) and it was amazing! Grant ordered his with sausage, mushrooms and onion, and it too looked delish. 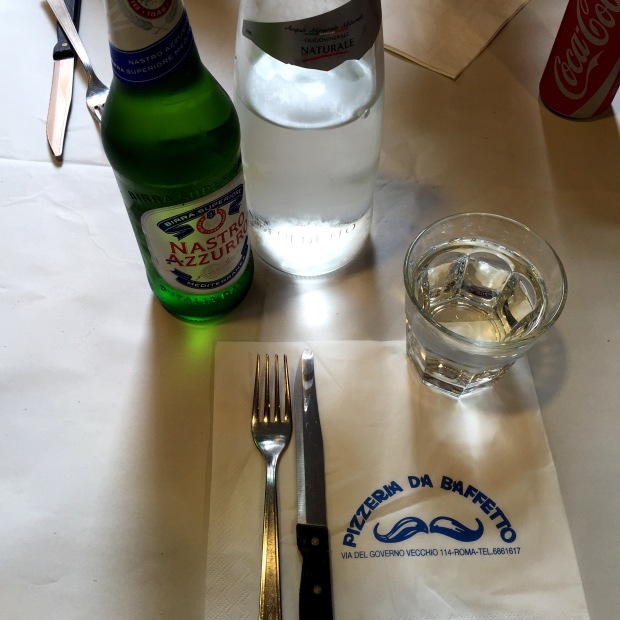 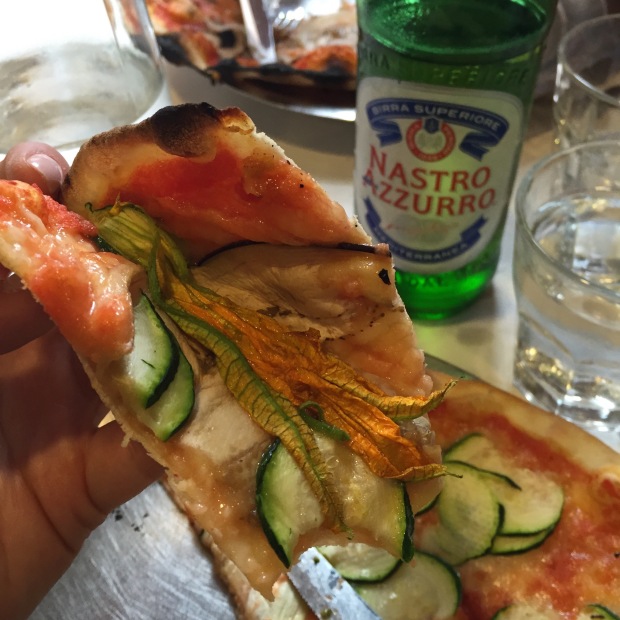 We headed back to our apartment to have a quick nap, then had a glass of wine and packed. After packing we set out in the direction of dinner at Cul de Sac and spent time in Piazza Navona, people watching and taking in the fountains. I am obsessed with all of the fountains in Rome. We need more fountains, Nashville! Cul de Sac was a great, small little restaurant and wine bar. It would be great for lunch or dinner if you are near Piazza Navona, you should definitely stop in and have at least one of their glasses of wine. 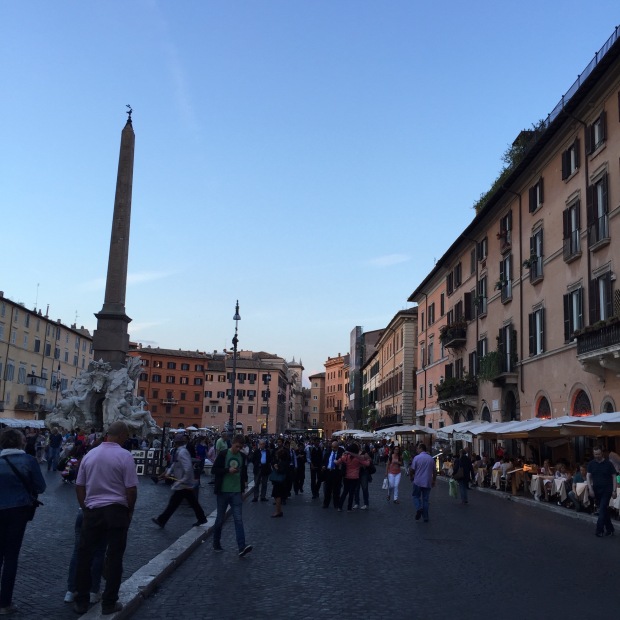 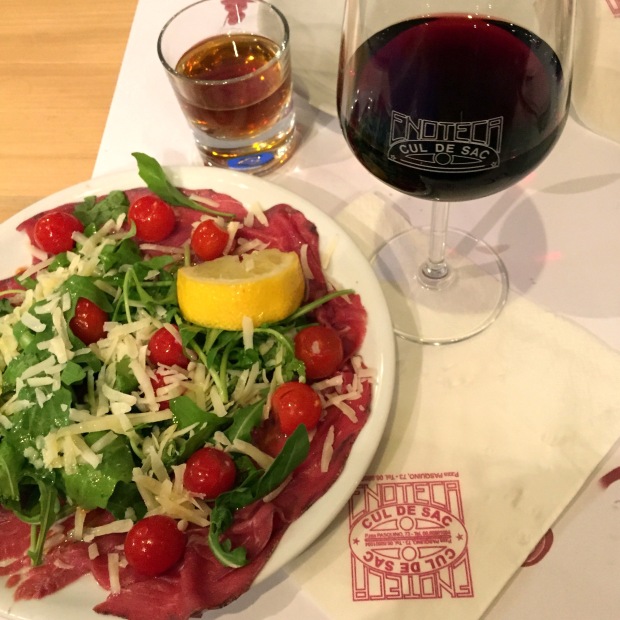 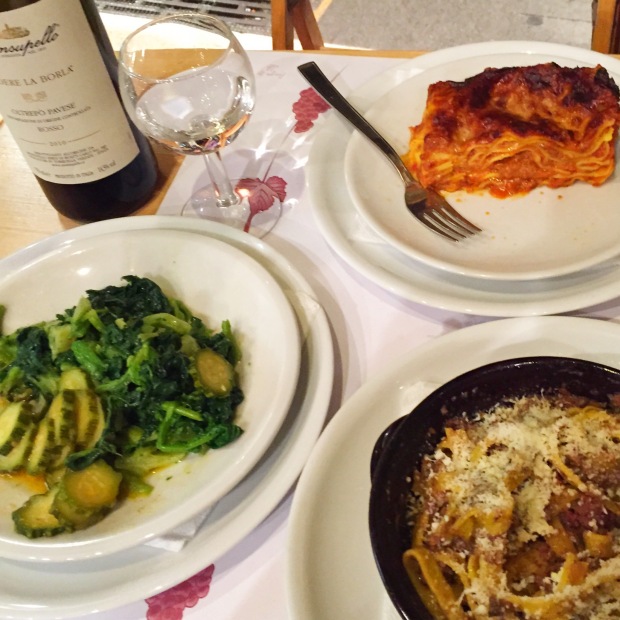 We left for the airport on Saturday morning, and I think I had tears in my eyes. Thank goodness for going home to our little pup or I may have never returned. Our vacation took a lot of planning and with the help of so many friends’ suggestions we loved every single bit of it. I am already daydreaming about where we will go next.